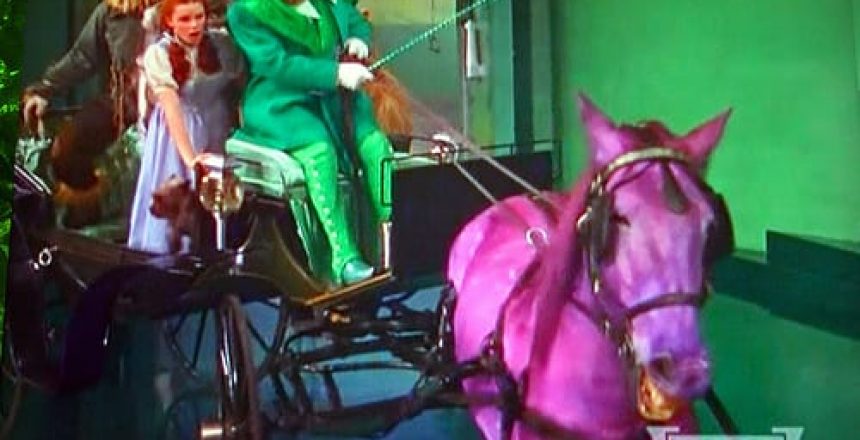 Upon finally reaching the Emerald City, and pleading at the giant green door to enter, Dorothy proves she was sent by the Good Witch Dorothy by showcasing her ruby slippers. The man at the door says, “Well bust my buttons! Why didn’t you say that in the first place? That’s a horse of a different color. Come on in!” A few moments later upon entering, Dorothy exclaims, “What kind of a horse is that? I’ve never seen a horse like that before!” The man responds, “No! And never will again, I fancy. It’s the only one of him, and he’s it! He’s the Horse of a Different Color, you’ve heard tell about.”

In the Wizard of Oz, the Horse of a Different Color changes suddenly from white (symbolism anyone?) to magenta and to many other shades. This phrase has become a common idiom, and the meaning and speculated origins are unpacked nicely here.

Matthew Frye Jacobson delves into this notion of people not fitting into groups and then how those groups changed in his book Whiteness of a Different Color: European Immigrants and the Alchemy of Race. This book is essentially a historical account of how “White” became “White” in the United States.

NOTE: This essay was written as a class assignment in 2012. On January 2, 2021, I made some small modifications. I must say that I’ve grown alot in my thinking since 2012, and cringe at alot of my writing from back then, but I don’t want to remove the article because it is one of the most read posts.

Before diving into my thoughts about this book/topic, let me start by asking you to consider:

See snapshot image from the 2020 US Census. 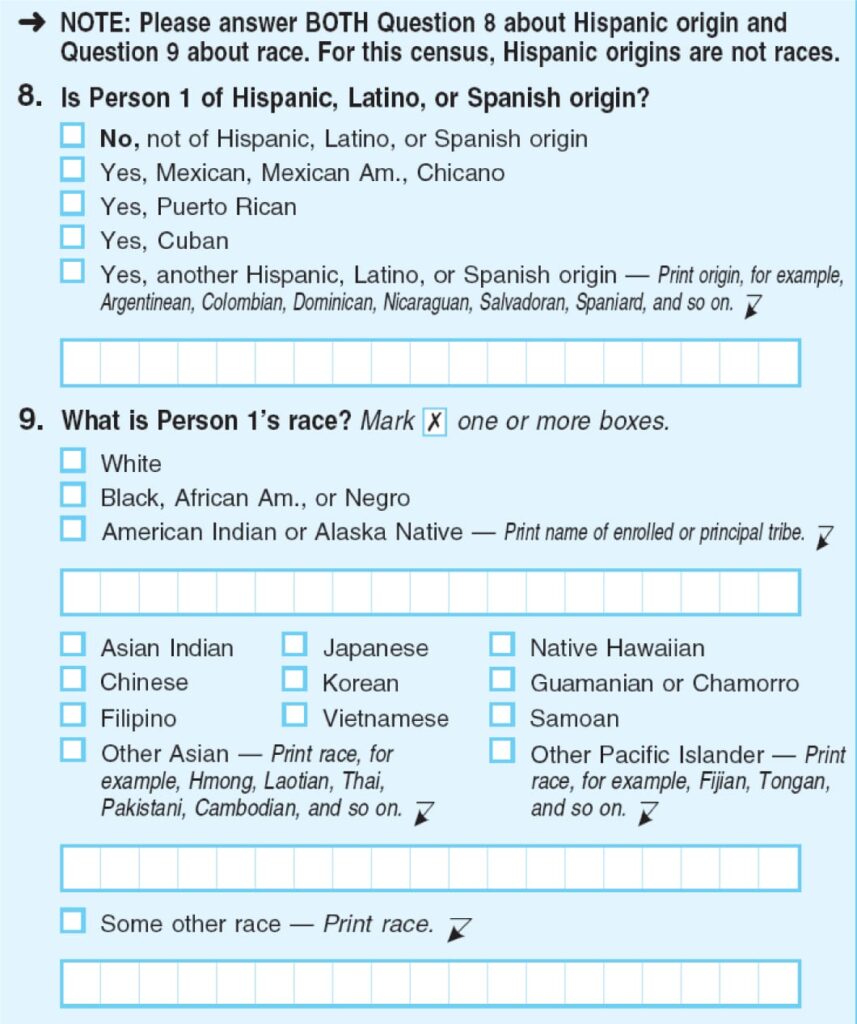 Race is a social construct that divides people into groups based on factors such as physical appearance, ancestry, culture, history, etc; a social, historical and political classification system.

Ethnicity is a social construct that divides people into smaller social groups based on characteristics such as shared sense of group membership, values, behavioral patterns, language, political and economic interests, history and ancestral geographical base. [w]

Nationality is the status of belonging to a particular nation, or legal citizenship, either by birthright or naturalization.

What is race, ethnicity, nationality, and culture?

Race, ethnicity, nationality, culture: each of these is not mutually exclusive of one another.

Let’s start with the broadest and perhaps most easiest to explain of these: culture, the customary beliefs or social forms and practices of any group.  Culture can exist in big and small ways. Your immediate family has a culture. Your philosophy class from college had a culture. Your high school may have been divided by the cultures of athletes, 4H folks, musicians, thespians, and braniacs. Texans have a culture (we are most all very proud of our Texas heritage and are thought to like things BIG!), but the culture in Austin is different from the culture in Dallas or Houston or San Antonio. The culture of African Americans in the southern U.S. may be different from those in the north. The culture of the working class is different from that of the extremely wealthy. Culture in each and every setting can be a mode, or ethos of the people that occupy it (willingly or not!).

When you consider nationality, specifically the formation of citizens in the U.S., this is where much of the confusion of race and ethnicity has been established within our “American culture.” The mode or ethos of our American culture is to classify everything, particularly along the lines of race, as this has been the pattern and thus establishment since the emergence of our nation. (When living in and traveling across Europe in 2005, I recall many people commenting on how “you Americans” must categorize everything.) Since the Naturalization Act of 1790 [z], the loose concept of “free white persons” has been the dividing line of citizenship and into the 20th century, a line of class and social acceptance.

Fitness for Government, or fitness for a white nation?

From the “free white persons” to waves of immigrants that confounded the boundaries of acceptable citizenship to a white and black battle, in the history of the U.S., it often boiled down to a “fitness for government.” Through the 1920s, “courts asserted the relationship between race on the one hand and ‘fitness for self-government’ on the other [pg 223],” sustaining the prejudices of the lawmakers of 1790. In the 1890s, “immigrants who were white enough to enter the country as “free white persons” could also lose that status by their association with nonwhite groups [pg 57],” exacerbating the lines of class by racial affiliation.

Explaining the logic of a judge in 1921 for denying citizenship to Asians, Jacobson summarizes: “‘The more homogenous the parts,’ such reasoning ran, ‘the more perfect the union.’ Thus it was not merely citizenship that was at issue in these cases but whiteness itself – its boundaries and its good republican substance. [pg 224]”  The power of racial demarcations was truly in the hands of our government. It was not imperialism but anti-imperialism, a racialist logic of civilization, sovereignty and self government, that kept the US from acquiring “savage” nations with non-white citizens who might further “muddy” the US population, [re: Philippines, pg 210].

By the 1950s, Jacobson writes, whiteness itself had become the normative American condition [pg 109], thus was it a “fitness for government” that controlled the American Nationality, or a physical veneer and social capacity for the ideals of a white nation?

The political history of whiteness and its vicissitudes between the 1840s and the 1920s represents a shift from one brand of bedrock racism to another - from the unquestioned hegemony of a unified race of "white persons" to a contest over political "fitness" among a now fragmented, heirarchically arranged series of distinct "white races." Race has been among the central organizers of the political life of the republic all along, and the racial reclassification of various European immigrants as their numbers swelled is among the most salient reminders of how powerful its sway has been.

No 50 shades of Gray, Just Black and White

The subjectivity of identifying race of people in the courts between the 1870s and 1920s was “evidence of the most concrete kind that race was a social convention, not a biologial fact [pg 226];” race as a conceptual category faded to race as a perceptual category [pg 173]. Circumstances conspired in the early and mid-twentieth century to heighten the “premium on race as color and to erode the once-salient “differences” among the white races [pg 95].”  Where once nationality, culture, and some biological indicators highlighted the differences among the white immigrants (Celts, Slavs, Italians, etc.), those with “white-ish” skin eventually became one in supremacy over blacks.

Common Ground, a quarterly journal published by the Common Council for American Unity between 1940 and 1949 had a mission (among others) to “overcome intolerance and discrimination because of foreign birth or descent, race, or nationality.” However the journal’s pages mark the rising concern with black-white relations and the related evaporation of white races. The journal’s “overall commentary on diversity developed along two distinct paths of “race,” which was chiefly political, and “nationality,” which was primarily cultural.” [pg 263] In 1939, Robert Ezra Park wrote in The Nature of Race Relations, “Physical markers generate race consciousness, and race consciousness in its turn influences social relations [pg 102].”

The treatment of race in the sciences underwent two fundamental changes in the years between the eugenic triumph of 1924 and the post World War II period: culture eclipsed biology as the prime determinant of the social behavior of races, and "race relations" displaced characterology as the major field of racial inquiry. Both of these trends significantly revised "the race concept" in general, and had especially profound implications for the notion of "difference" as it applied to the white races of Europe and the United States. Strictly biological understandings of race as the key to the diversity of humanity gave way to cultural and environmental explanations... a paradigmatic shift from "race to ethnicity."

Do the Definitions even Matter?

Race is typically understood as a biological classification, historically simplified to: “Caucasoid, Negroid, Mongoloid.” In essence, though, it is a means of classification based on “skin color, the texture of hair, nose width, lip size and slant of eyes—all attributes that serve to define race [x].”

But does not the previous discussion mark race as a perceptual social classification or construct? How then is biological simplification accurate?

When you look at the racial categories included in the 2020 US census questionnaire (see image above), there are lots of options – however white and black are simplified categories in comparison.

Census.gov defends: “the racial categories included in the census questionnaire generally reflect a social definition of race recognized in this country and not an attempt to define race biologically, anthropologically, or genetically [y, emphasis added].”

So are we talking about race, ethnicity, or nationality? It is unclear to me by the questionnaire, so can race exist without social definitions?

Ethnicity, by definition, is the fact or state of belonging to a social group that has a common national or cultural tradition, though according to this questionnaire,  as it stands in the U.S., you are either ethnically Hispanic or not, with no other designations available for the choosing.

I asked you at the beginning, what is your race and ethnicity?

For the longest time, I didn’t know the answer for myself. As a white person who was raised in a predominantly white culture, it was sort of like asking a fish if the water is wet. They don’t know because it’s all they know. I thought race and ethnicity identifiers were for people who didn’t look like me, and I didn’t understand the construct of race and whiteness. I’d say things like, “my dad says I’m 1/16 Cherokee,” or “my mom’s family is Cajun,” or “I’m tan, not white,” as a retort to being anything other than white.

It wasn’t until I learned that race was a social construct, something that has evolved over time to mean different things that I was able to accept that I am white. Then, thankfully, I was able to begin unpacking the unearned privilege I have in life as a result of my skin color.

What about you? What is your race? Ethnicity? If you were born 200 years ago, would your race have been different based on the morphing social constructs?

If you are still struggling to understand race, you could: 1) just ask the Wizard of Oz, 2) click your heels, repeat “There is no place like home,” or maybe, acknowledge it’s simply a horse of a different color and do some studying to learn more about race in the US.