The Tortoise and the Rat 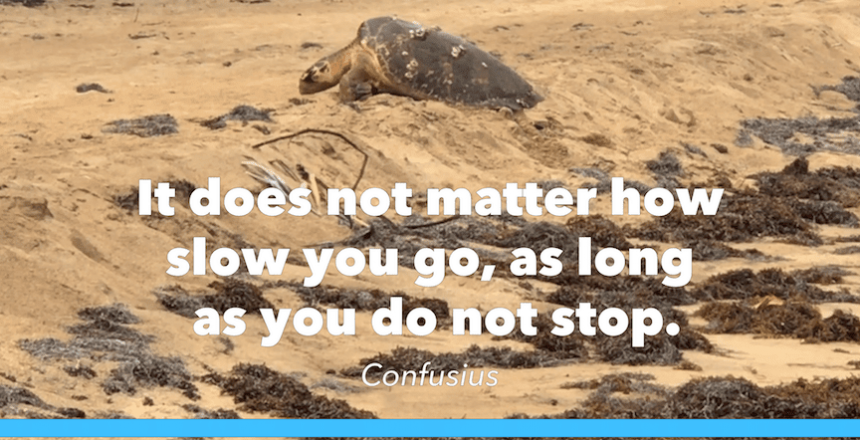 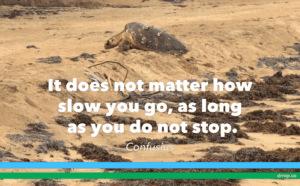 Sure, you were expecting the tortoise and the hare, right?

Well, yesterday, I met a giant tortoise, or rather a hawksbill* sea turtle (or caguama tortuga), on a secluded beach in Maunabo, Puerto Rico’s nature preserve, and she reminded me of the rat race.

I’d been working all day, engrossed in the proverbial state of flow, in beginning work on a book. The schedule I’d set for myself had been blasted, and I got to the beach two hours later than planned for a run.

Now, all of this sounds awful, I bet.

Sitting with my desk facing the Caribbean, with the cool breeze whipping through the house as I design and create what will certainly be a best-selling masterpiece. How could it not be, with this as it’s beginning? 🙂

So excited about the progress I was making, I decided to blow off the preset schedule I’d made for myself (yes, even on vacation, I seem to need a plan and a to-do list). For once, I couldn’t be more grateful for not following the plan.

Upon arriving at the quiet beach, I turned right to jog toward the lighthouse, about 1/3 of a mile. For whatever reason, I decided to walk after turning back. It was a beautiful day, even though a bit overcast. The beach was completely empty, and with each crashing wave, my soul felt more and more refueled.

Nearly back to where I started, about 25 yards in front of me, I saw a giant turtle just crawling out of the sea. Stunned, I pulled out my phone from it’s running pouch as fast as I could to capture this beautiful beast. Great thing about turtles is they don’t move very fast, so I had more time than I thought.

I know it is nesting season, because the beach is speckled with stakes and markers noting sea turtle nests, but I didn’t think that turtles ever nested and buried eggs during the day — and a quick google search confirmed this.

Therefore what I was witnessing was truly remarkable and rare.

I watched as she crawled up the beach, making a few movements at a time, then resting for a while. After all, she only has fins, not feet, so to move her 200-250 pound body UP the beach and over hurdles requires immense amount of strength and evidently energy.

She went further past the tree line than any other marker on the beach, and found her way into a small cove of sand surrounded by coconut trees and palms. To get there, she hurled her body over fallen palm branches, and refuse of consumed coconuts.

She got to work.

Using her back fins, and moving her body side to side, she built a nest, then crawled out of it.

She did this over and over again, going in circles in the small cove, having attempted at least 6 nests.

I was enamored. Staying at a distance, and always moving to stay out of her line of sight, I watched her struggle to move and dig.

Thinking about all of the things I wanted to accomplish, I kept being torn — should I go back to the house? After all — this whole process lasted hours. But then I’d settle in and get back to focusing on her efforts and watching her work.

As the sun began to set, a couple of women were walking towards me from the light house. I waved at them, pointed toward the hawksbill, and put my finger to my mouth suggesting they be quiet. As they approached closer and realized what I was signaling, they gasped and were truly taken aback.

One of the women is a professor of marine biology somewhere in Connecticut, and the other female is one of her students. They are on the island conducting research on something else, but they both knew a lot about turtles! What are the odds?!

We stood there together for about an hour, as the turtle began to move slower and slower, and the daylight faded almost totally away.

Finally, after apparently never laying eggs – so far as I could tell, she began her journey back into the sea.

The scientist suggested that maybe it was her first time, and she was trying to figure it out. If they aren’t able to dig as deep as they need, perhaps hitting a tree root, they’ll move on to create another nest. Since she was in the trees, I imagine this was the case.

For four hours, I watched this glorious animal, and the time flew by before I knew it. This could be one of the most meditative experiences I’ve ever had in my life. (Though a close second is the time I spent with a giant manta ray while paddle boarding in Maui!)

Watch a compilation of short videos of her journey at the end of this post.

What if I’d stuck to my schedule? What if I’d run instead of walked after turning at the light house? I’d have missed the turtle completely.

What if I’d chosen to finish my run, or return sooner to tackle my priorities? I’d have missed experiencing the complete journey of the turtle.

I find myself seasonally impatient and anxious for the “next step,” and I do not feel alone in this as many of my friends express similar feelings. This is largely driven by the “rat race,” and a focus on getting ahead and ultimately winning.  This is no surprise, as the dominant western and American value system (in which I was raised) drives us to be competitive, action oriented, and seeking productivity, success, and money above most all else. While I certainly espouse other values, like making the world a better place and a preference for collaboration, old habits die hard (based on what seems to be rewarded most in life).

Lily Tomlin, famously said: ““The trouble with being in the rat race is that even if you win, you’re still a rat.” Is it possible that we are in the rat race, because we allow people to treat us like rats?

At the end of the day, so many of us end up burning out like the hare, and going wacky from the ever spinning and never progressing hamster wheel.

Most people don’t live; they just race. They are trying to reach some goal far away on the horizon, and in the heat of the going they get so breathless and panting that they lose sight of the beautiful, tranquil country they are passing through…” –Jean Webster

Lessons from the Hawksbill

Hawksbill turtles are solitary for most of their lives; they meet only to mate, and begin breeding at full growth, about 35 years. According to the scientist on the beach, mating is one of the most dangerous activities for the animal and many often drown during the process – as they mate at sea with an aggressive male, and she is forced to swim for both of them. Laying the eggs after multiple mating partners is the easy part, she said. As an endangered species, there are lots of forces against their ultimate survival on this earth.

Maybe we can take a few lessons from the turtle, and start living more like her:

Which lessons resonate most with you?

What other lessons could we draw from this experience?

* This post originally had the turtle identified as a hawksbill. I found out shortly after posting by the volunteer group here in Maunabo that it is likely a loggerhead, and then later that it was probably a hawksbill. Either way, it is a beautiful animal. The Hawksbill is considered critically endangered and the loggerhead is a threatened species in this region, and endangered in other parts of the world.