What is Social Capital? 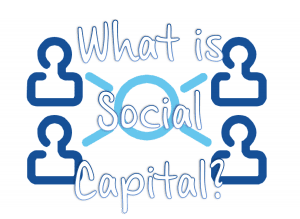 When we think of capital, we typically think immediately about money. Entrepreneurs seek Venture Capitalists to provide money to get their product or idea off the starting blocks and into the races.  The valued resource in this example is purely financial, or economic, and this is just one dimension of what “capital” really means. For example, economic capital provides a position of class, and individual wealth; political capital provides a position of authority, and individual power; and social capital provides a position of status or prestige, and individual reputation[pg 37]. The elements of social capital, or the embedded resources in social networks, include the flow of information, social ties that exert influence, certifications of an individual’s social credentials, and reinforcements of support and acknowledgement [pg 20].

Ultimately, with capital, there is some form of action, and Lin summarizes this action as either instrumental or expressive. Instrumental action is taken to obtain resources not possessed (e.g. entrepreneurs seek Venture Capitalists), and the returns are extrinsic: economic, political, and social. Expressive action is taken to maintain resources already possessed, and the returns are more intrinsic: physical health, mental health, and life satisfaction [pg 244]. Lin states that “social capital works in instrumental and expressive actions not accounted for by forms of personal capital such as economic or human capital [p 20],” meaning social capital requires both forms of action. In a simple summary, social capital could be described as your reputation within your network, and how you leverage both.

This was originally posted in another blog post: Influence of Social Capital on the STEM Pipeline, Nov 1 2012.

Meagan’s essay/blog mentioned above examines the theory of social capital, as described in Nan Lin’s book, Social Capital: A Theory of Social Structure and Action

, and aims to provide a new perspective by extrapolating the potential influence social capital has on the STEM pipeline, specifically women and engineering, from K-12, to university, and into industry. Read it now.